skip to main | skip to sidebar

Follow the action here and here. Is Kei Igawa even trying anymore? Against a college team he was the only Yankee pitcher to surrender a walk, a run (on a HR) and allowed one of the two hits - and for good measure he hit a batter. Otherwise, the team played well; the other pitchers combined for 8 innings of one-hit ball with 8 Ks and no walks.

Hughes was, in a word, terrific. He made Johnny Damon, Derek Jeter, Bobby Abreu and Francisco Cervelli look foolish at times. He got Abreu to swing and miss at a curveball and had Damon fouling balls off the other way, a sign of how late his swing was. Jeter only swung at 3 of the 10 pitches he saw and fouled all of them off.

Posada concurred, and the backstops aren't the only ones who have noticed.

Said manager Joe Girardi: "You watch him and he leads the groups in running. He just looks like an athlete, a thoroughbred and a leader."

As is Joba Chamberlain -

After compiling extraordinary results last season on the strength of just two pitches, a high-octane fastball and biting slider, Chamberlain threw a new wrinkle at Yankees batters. Under steamy, artificial hitting conditions, it was Chamberlain's changeup that starred.

"The goal is to get him to be a complete pitcher," Yankees manager Joe Girardi said. "We envision him as a starter and to be able to use all of those pitches. It just gives him more weapons, especially when you're going through a lineup the third and fourth times."

Hopefully this will make the Yankees think twice about putting Joba in the pen... Is it opening day yet?


- Heard on Sirius NFL Radio that the Giants are considering trading draft picks for Atltana corner Deangelo Hall. Word is it will cost at least a 1st round pick (and a 5th?). Hall is a great cover corner, and would probably fare well in Spagnuolo's aggressive man-coverage scheme. He's only 24 years old with four years of NFL experience, has 17 career interceptions, 48 pass deflections and 230 tackles. The only possible problems are: 1) Hall has had 'character issues' before - would that destroy the great chemistry?, and 2) he wants a long and well-paying extension (he's a free agent after the coming season). Is it worth it? Probably yes.

Coughlin and the G-Men are close on a four-year extension. Definitely deserved after winning the Super Bowl but... it would nice to see this team play to it's full potential the whole year rather than in spurts.

- Spring Training, the time when every player is in the best shape of his life.

- The Yanks are doing more running this year because apparently it builds the hamstring (which was a major problem last year) - who woulda thunk it?

- AL East preview, with a short piece on Phil Hughes.

- Was Joe Girardi responsible for the Marlins plague of pitcher injuries?

- Don Mattingly is now 'grateful' he was bypassed for Yankee manager.

- An interview with Hal Steinbrenner.

- If you're interested in NFL mock drafts (as I am), this is the place to be.

A former Rams player, along with three fans, are suing the Patriots for 'fraudulently' gaining an 'unfair advantage' before their Super Bowl matchup in January 2002. They allegedly videotaped the Rams last walk-though practice before the game. It just gets worse and worse for Belichick and Co.

- How bad is the San Francisco baseball Giants offense? Awful.

- Just a mention but NFL.com has a great section of video on the Giants, specifically NFL Films 'Game of the Week' recaps of their playoff run.

- FYI, going by the most complex (best?) projection system out there, Melky is projected to have a better 2008 than Sawx uber-prospect Jacoby Ellsbury. Don't forget, Melky is also younger, has more ML experience and plays in a tougher hitting ballpark.

The Giants were picked by some to be the worst team in the NFL this past year, yet finished first and are now called 'solid from top to bottom'. What a difference a year (and a good draft) can make.

- In related news, hundreds of 'Patriots 19-0' t-shirts were donated to underpriviliged Nicaraguan children.

- Good ST update from Pete. I especially appreciate his observations on Jesus Montero. The photo of Girardi talking with Brian Cashman really hits home that Joe Torre is not the manager anymore. I know it's been that way for months, but it didn't really set in until today. It's not #6 anymore, it's #27.

Should Bill Belichick have his titles stripped? He's reportedly been illegally videotaping opponents' defensive signals during his entire tenure with New England. Wow. No wonder Tom Brady has forever to throw with an above average offensive line - they know what's coming! And they just happened to win three Super Bowls by a combined nine points? Those videotapes could certainly have been the difference in crowning a champion. Check out the new poll. -->


As for the closed poll, I was surprised to see that many who thought the Giants stood a chance. I thought they'd make it close, but fall in the end (kind of like their first meeting).

- BPro was nice enough to provide their PECOTA projections for some of the Yankees for the upcoming season. The Joba projection seems a bit too good (although with a two-month bullpen stint that ERA is possible), while the Hughes projection seems too harsh.

- Speaking of Joba, he will in fact start the season in the pen. The plan is to use him as a reliever through May, send him to the minors for 3-4 weeks to build up arm strength, then return in July as a full-fledged starter. Not a terrible idea, because Joba's innings can't top 160, but I still prefer the idea that the Yanks use a 5.5-man rotation to limit innings. My biggest fears are that (A) Joba will be so good in the pen that Hank and the casual fan will resist a move to the rotation, and (B) he will have focused on just two pitches for five months (Aug., Sept., Oct., Apr., May) - a 3-4 week 'conversion' might take more like 4-6 weeks.

- Chien-Ming Wang was 'rebuffed' by the Yanks when he asked for a longterm contract extension. In the Yanks view, pitchers don't stay healthy (compared to position players)


Ok, couldn't go a whole day without a Giant link (or three). Here's a trio of Peter King stories for your reading pleasure:
one
two
three

Listening to Sirius NFL Radio a few days before the Super Bowl. A caller from Boston went into a spiel about Boston owning New York, and how the game would be over by halftime, and he even predicted the score: 63-0. After that, one of the hosts said: "New England has to win this game now." Oooooh, sorry there Bostonian...

- In related news, read about the five stages of grief (and get a laugh). 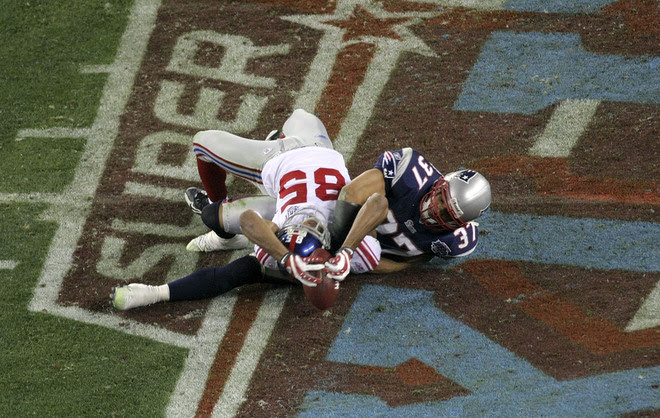 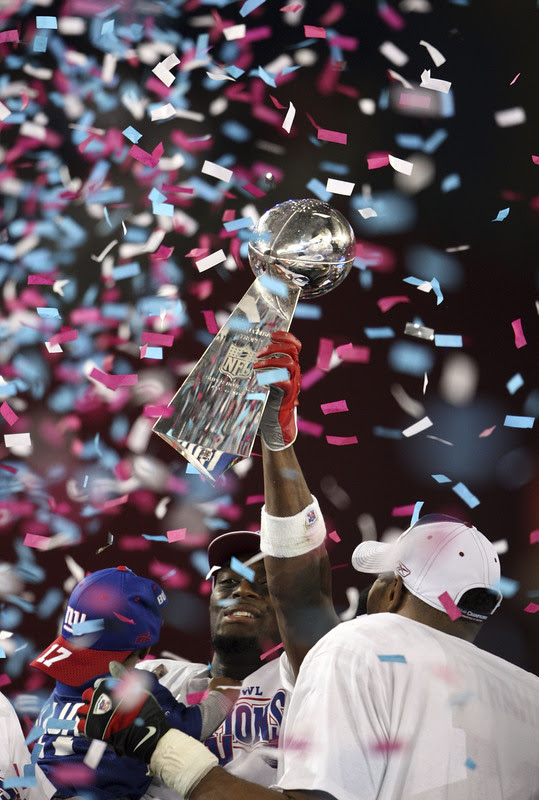 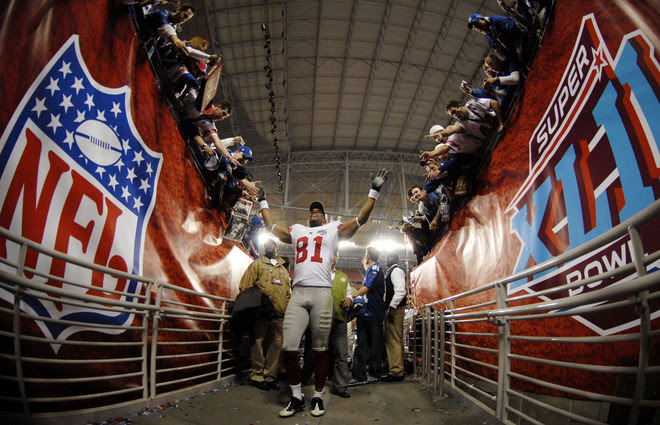 - and the crow-ingesting recap. :D

- 'The Great Escape' in detail.

- ESPN's coverage:
The recap
Chadiha
Simmons has a humble-pie sandwich.
Clayton 1
Clayton 2
Brady was finally pressured. But was he rattled?
Tyree's magical grab.
18... AND ONE.
2008 Preview
Most watched Super Bowl ever (and 2nd most watched program in U.S. history!)
Nevada casinos lost money on the game. Awww, I feel horrible for them...

- Steve 'The Genius' Spagnuolo will not leave the Giants. Instead he will remain as the defensive coordinator for another three years, becoming the best paid DC in the business.

- But seriously, the real story is on it's way.

- Talked to a Colts fan after the Super Bowl. He said he was rooting more for the Giants this year than he was for own team in last year's big game. He hated New England.

- Unfortunately I missed most of the post-game coverage, the parade, the TV and radio interviews (being out in the Caribbean). The only sports channel they had was ESPN2, which most of the day shows World's Strongest Man, Snowboarding or college basketball. However, I have the game taped on my DVR, so I'll rewatch it this week so I can actually enjoy it instead of causing a heart attack (like it nearly did the first time).

- I was dreading a trip to Boston in two weeks (to take shit from my Pats/Sawx friend there), but alas it will now be a pleasant visit.

- New York Giants: World Champions of Football! (still can't get enough of it).

19 and zero doesn't sound quite as good as 18 and ONE. I STILL can't believe it. No other team feels better to defeat than the (previously) undefeated Boston Patriots. No better way to end a magical season.

Don't forget you read it here first: my prediction was 35-31 Giants, but what the hell, I'll take it anyway.

I can't describe the feeling I had (maybe I can: overwhelming joy) when Tom Brady's 4th & 20 pass sailed over his receiver's head with one second left and the celebration started. Not only did the Jints slay Goliath, but it was one of the greatest games I've ever seen (no doubt one of the best in NFL history). I plan to rewatch it countless times during my life.

The G-Men become the first New York team to capture a title since the 2001 WS loss and the 2004 LCS collapse. This will definitely lessen the pain from those events.

Peyton, 2007 World Champ, now Eli - although he won MVP, Steve Spagnuolo really deserves it. Holding the Pats to 14 points was unheard of before tonight.

I owe my cousin and his family a dinner (for undisclosed reasons, he brought the Giants luck) which I'll gladly treat them to when I see them.

See y'all in a few days, when it's not costing .75/minute to get online.

2008 Giants draft: who will have the best career?

Positions in order of defensive importance